⭐️ Trip Policies: Trip Policies are a new tool to help balance operating costs with driver flexibility. They can help empower your drivers to make good business decisions without leaving your organization in the dark about their choices, and they can help protect profitability when unexpected turns happen out on the road.

With this mobile app release, we’ve created the first two policies for this framework: Max Miles and Max Tolls. As part of each load or trip returned by your web services, you can enable one or both policies. When the driver goes to plan that trip, it’s checked against the active policies for that load and the results are displayed to the driver before the wheels start rolling. 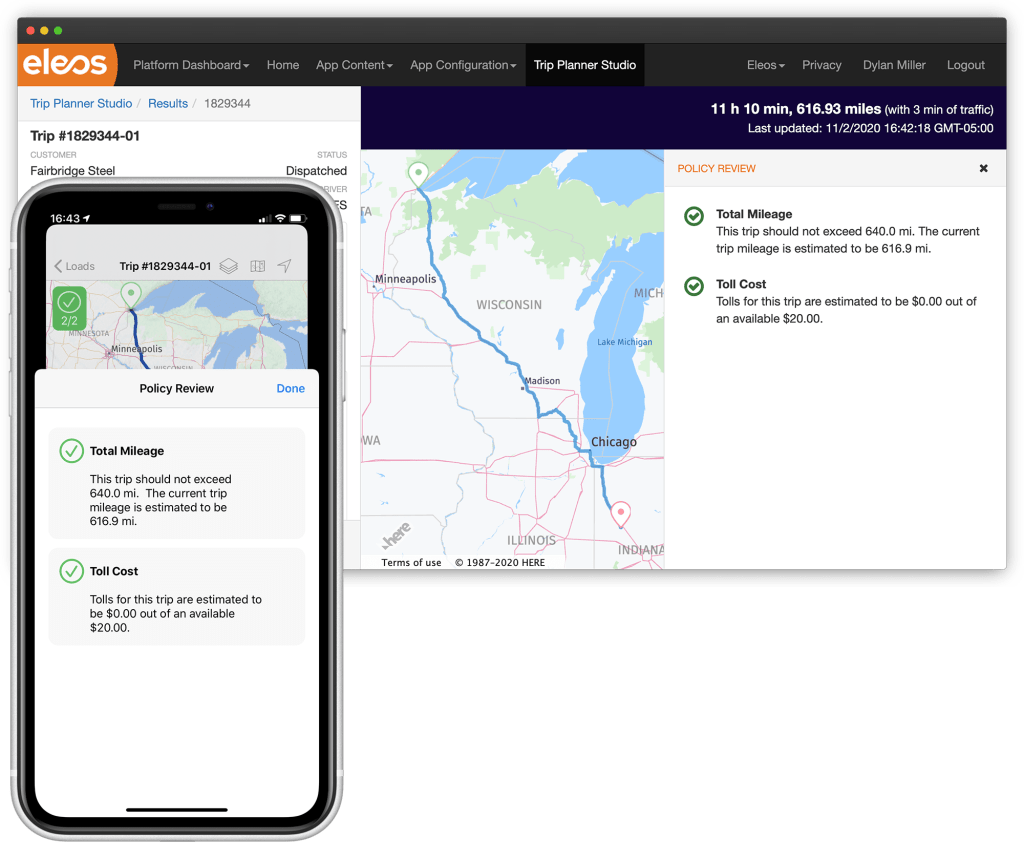 The route used for policy evaluation includes both edits made by the driver—such as planned rest stops—as well as estimated mileage driven as part of previous stops, including out-of-route deviations that occurred while driving. If the planned trip exceeds the set thresholds at any point, the driver will see an indicator and an explanation of the violated policies.

The results of Trip Policies can also be viewed in Trip Planner Studio. This gives your dispatchers and back office personnel visibility into the choices the driver made while planning their trip.

If a driver knows the violation doesn’t pose a risk to the load, they can choose to mute that particular violation with a reason. This makes sure that additional violations that occur as the load progresses aren’t ignored or lost. When a driver mutes a policy, a Trip Planner Studio trip snapshot is created, and a web service request is made to your systems for optional processing or alerting. Historical trip snapshots are also available via Trip Planner Studio and the Trip Planner API.

For detailed information about the new API available for enabling Trip Policies, see the What’s Changed section of our developer documentation.

✅ As usual, this version of the Platform mobile app is designed to be backwards-compatible with your existing web services and doesn’t require server changes prior to being deployed. If a future version introduces a backwards-incompatible change, we’ll note that in this portion of the release notes.

🐞 Fixed a bug where route requests sent to the Trip Planner API with `hazardous_types` set on the stop level may cause the routing request to fail.

🔧 Trip Planner API now creates a new snapshot of the load when any truck properties or routing options have been changed on the load by the customer web service.

🔧 Trip Planner Studio now indicates when a driver plans a trip with a different departure time or stop.

🐞 Fixed an issue where per-stop route options (including truck dimensions, weights, and restrictions set at the stop level rather than the load level) were applied to the leg after that stop rather than the leg before. However, the route options were honored as documented for the actual navigated guidance route.

🐞 Fixed an issue where Trip Planner would refresh/redraw unnecessarily, leading to a brief flash

🐞 Fixed an issue where per-stop route options (including truck dimensions, weights, and restrictions set at the stop level rather than the load level) were applied to the leg after that stop rather than the leg before. However, the route options were honored as documented for the actual navigated guidance route.

🐞 Fixed crash on dashboard that happens with the Galaxy Fold

🔧 Updated the Android target SDK as required by Google