⭐️  Add Stop by Address: We’ve added an “Add Stop” button that allows users to add a stop to their trip plan by searching for a street address. In combination with the ability to add a stop at an exact point using a long press, this eliminates the need to contact dispatch to add a stop to a trip. Drivers now have more tools to make sure their plan reflects the reality of the trip by including rest, fuel, and other non-revenue stops.

As with stops added via long press, added stops are considered when evaluating any Trip Policies defined on the load. They’re also immediately delivered to your backend systems via the trip changes endpoint.

“Add Stop” is enabled by default, but you can disable it on a per-load basis by setting the prevent_trip_edits flag. You can learn more about the details of the flag in the loads section of the documentation. 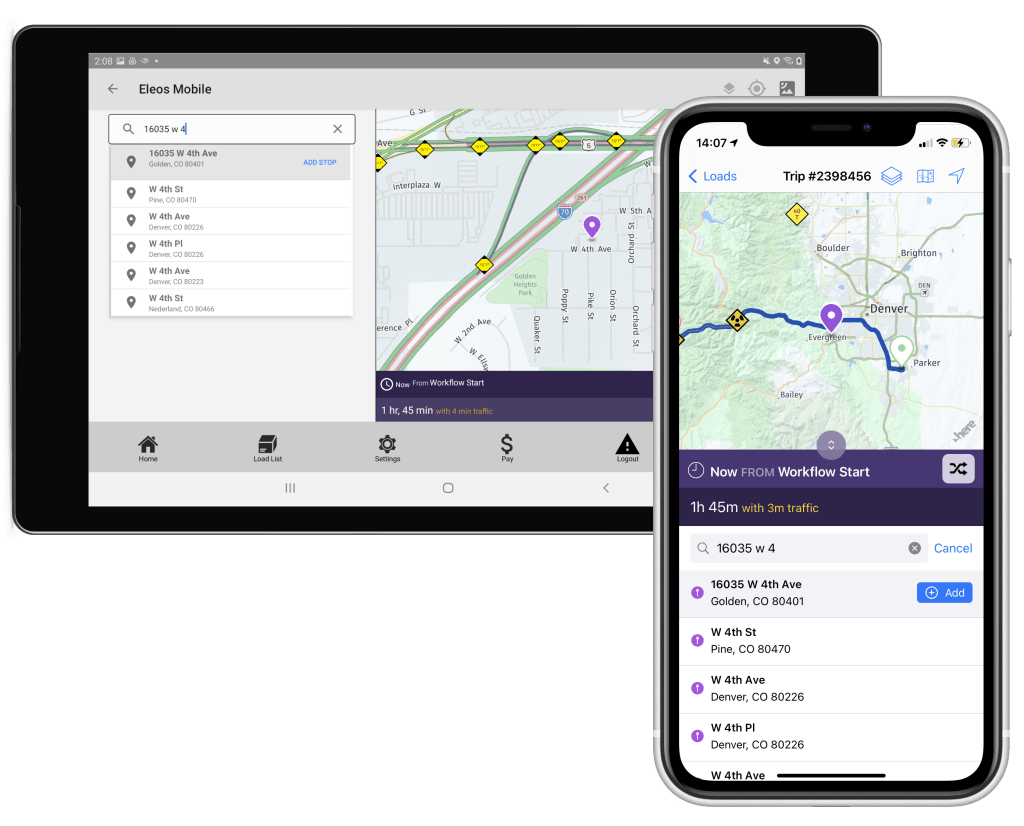 ⭐️  Zoom and Pan During Navigation: By default, zooming and panning the map is disabled while drivers are in turn-by-turn navigation. However, you can now enable zooming and panning so that drivers can examine their route and the remainder of their trip without bringing the vehicle to a stop and exiting navigation. To enable this feature on a per-load or per-stop basis, set the enable_map_interaction_in_navigation flag to true. You can learn more about the details of this flag in the loads section of the documentation.

🔧  Android App Bundles: We’ve updated the apps to be packaged and distributed as Android App Bundles, which are compliant with Google’s new Play Store requirements. This also reduces the download size of the app and updates, which helps reduce cellular data usage when you roll out a new version.

If you’re deploying your app directly to drivers via the Play Store or via Managed Google Play using your MDM, you won’t need to change anything. If you directly deploy APKs today, we recommend switching to Managed Google Play for distribution moving forward to take advantage of the reduced download sizes, faster app updates, and simpler management. If you only distribute the app privately, we can continue to provide APKs instead of app bundles, but please be aware that we expect Google to eventually phase out APKs entirely.

✅  As usual, this version of the Platform mobile app is designed to be backward-compatible with your existing web services and doesn’t require server changes prior to being deployed. If a future version introduces a backward-incompatible change, we’ll note that in this portion of the release notes.

🐞  Fixed an issue where weigh stations don’t appear on the overview route before starting navigation.

🐞  Fixed a bug where custom warning messages sent from the route analysis weren’t displayed when viewing trip planner routes and before choosing to start navigation.

🐞 Fixed an issue where weigh stations don’t appear on the overview route before starting navigation.

🐞 Fixed a bug where POI icons would not display properly on low-density devices.

🐞 Fixed a crash that sometimes occurs during navigation.

🐞 Fixed a crash that could occur about 10 minutes into turn-by-turn navigation.

⭐️  Archive Forms, Actions, Custom Screens, Dashboards, Menus, and Workflows: To help keep App Editor neat and tidy, you can now archive forms, actions, custom screens, menus, and workflows that you’re no longer using. If you realize later you still want to use an item after it’s been archived, you can find it at the bottom of the list under Archived.

⭐️  Route History Support for Pluggable Routing: Individual routes computed using pluggable routing are now captured and shown in Trip Planner Studio when you search for route history. This can help with diagnosing issues and help confirm that drivers are seeing the routes you expect.

🔧  We’ve improved several server-side cleanup processes to help keep the initial sync after login speedy, even if you frequently update forms for that environment.

🐞  URLs now validate the protocol when a substitution is included.