⭐️ Navigation – Time & Distance to Destination: Turn-by-turn navigation has been updated to include the remaining drive time and distance to the destination. 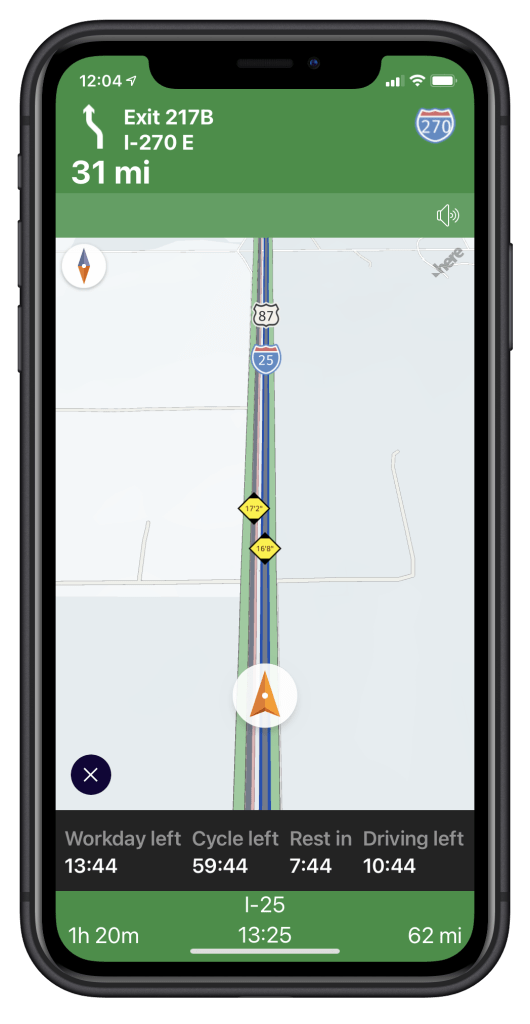 ⭐️ Trip Change Notifications: If your drivers are using in-app navigation and out-of-route miles are a concern for you, you’ll appreciate that trip change notifications now differentiate between reroutes that are served up by the application due to traffic congestion, road closures, etc. and reroutes that are triggered by the driver taking a wrong turn or intentionally driving off the prescribed route. Moving forward, the reroute trip change notification has been replaced with system-reroute and driver-reroute. Snapshots in Trip Planner Studio have also been updated to provide this new level of granularity.

⭐️ OpenCab Support (Android): We’ve extended our mobile app to integrate more smoothly with other trucking-specific apps. We’ll be announcing the first available integrations soon, which will work with this release without a subsequent update. You can learn more about OpenCab at opencabstandard.org.

⭐️ Device Identifiers (Android): You can now set a per-device identifier via MDM and have that value shared with your server when a user is authenticated or fetches updated load information. For example, if you slip-seat and have mounted tablets that are assigned to a truck, you could use this information to automatically identify the truck a driver has logged into for the day. Alternatively, you could use this to hide driver payroll information from the app menu when the app is accessed from a company tablet, to avoid a team driver seeing private information.

⭐️ Drivewyze for iOS: As a follow-up to its introduction on our Android apps, we’ve added support for Drivewyze weigh station bypass notifications to iOS as well, which means you can now seamlessly deploy time-saving bypass functionality to your whole fleet regardless of what kind of devices they use. If you include Drivewyze product license, driver, and vehicle information as part of your web service response, we’ll automatically show bypass notifications to the driver while they’re driving, all without leaving the app. We’ve also extended our Drivewyze integration for both platforms so that you can use more convenient “external” identifiers for vehicles and drivers, which makes integration simpler and faster.

ℹ️ Upgrade Note: Trip changes from newer versions of the app will use more detailed reasons for reroutes, as part of the Trip Change Notifications enhancement mentioned above. See What’s Changed in the documentation for the technical details. All other changes in this version are backward-compatible with your existing web services.

🐞 Data substitutions will now work offline for the “scan-flow” and “screen” actions.
🐞 Any number of actions can now be viewed and added to a workflow status regardless of screen resolution or window size.

🐞 Fixed an issue where Trip Planner Studio wouldn’t display the shipper or consignee in the correct sort position in the trip if these stops were not first or last, respectively.

🔧 All changes that are part of a trip snapshot can now be seen in Trip Planner Studio, rather than just the first reason. 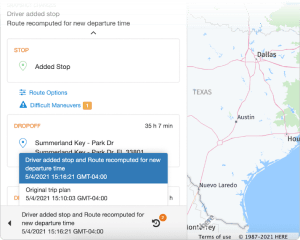 🔧 The “Potential U-Turn” and “Tight Turn” maneuver warnings have been renamed to “Difficult Maneuver” to emphasize that these may need review by the driver, but that they don’t indicate specific company-mandated violations.

🔧 Icons are now visible in the icon dropdown in App Editor.